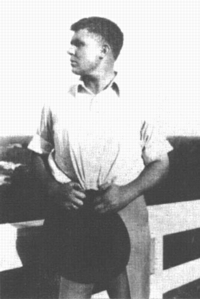 First of all, welcome to new members Jeffrey Elmquist, Paul Herman, Josep Parache and Gary Romeo! I know the "Three Musketeers" were in fact four, but it seems we have become the "Magnificent Seven" instead... Onward for the "Dirty Dozen"!

Frank and Rusty: I particularly enjoyed your contributions to the first issue of this new electronic forum. By the time the third one appears, I am about convinced I will have mastered the subtleties of Internet-formatted documents and won't be caught by the Dreaded Deadline Doom; this way I will be in a position to offer more substantial comments. I did enjoy your efforts, though.

As promised in Dwelling in Dark Valley #1, this second installment is also mostly biographical in nature, and will probably be subject to some controversy. Comments and criticisms are welcome. (By the way, I would like to thank Steve Trout, who pointed out to me that Slasher, in "Beyond the Black River", is not "Balthus' dog". I stand corrected.)