"My empire is of the imagination", H. R. Haggard

The article "The Howardian Hero as a Berserkr" was originally published as a chapter in Javier Martín Lalanda, La canción de las espadas: fantasía heroica en Robert E. Howard, Tiempo de Ediciones S. A., Madrid, 1983, p. 138-140, and appears here with the author's kind permission. Notes by the translator are enclosed between square brackets.

The Howardian Hero as a Berserkr

The Nordic peoples gave the name of berserkr ö bear-furred or bear-shrouded ö to the warriors who, in the clamor of battle, possessed by Odin, the god of war and magic, shed their human behavior, acquired over millennia of cultural evolution, and gave free rein to their animal instincts by behaving as bears or wolves. This resulted in their analogous name of

œlfheđnar, which means "with a wolfâs head" (1). Examples of warriors aroused by the gods can be found in a variety of cultures (2).

The warrior, whom we will refer to by his Scandinavian name berserkr, performed an important task within his community: to protect effectively its members from any exterior attack. He would be trained to perform this job by means of a double initiation, both warlike and magical, which distinguished him from all the other fighters (3) and which situated him "beyond" the law.

In extended periods of peace and in historical moments involving the end of a certain mind-set, such as the moment that enabled the coming of Christianity and its expansion over all of Central and Northern Europe, the people might begin to mistrust the berserkr. Perhaps they would even begin to wonder if he was transformed, at sundown, into the beast whose fur he wore over his own skin, giving rise to legends of shapeshifting beings, such as werewolves, human bears, and so on. Here we are witnessing an inversion: that which to a certain point had been deemed "beneficial", useful, has become "harmful", perhaps because it is no longer useful. This behavior of despising others when they no longer fulfill a purpose is a common characteristic of civilized societies.

Thus, the wolf, which until then had symbolized the individual disposed to a wandering life, but also the élite warrior discussed above, now represented the outlaw, the Wargus, which in the Salic law of the Franks, used since the VIth century, referred to any person who had been expelled from his territory. He was also designated by the term Volveshevad (wolfshead), an expression that can be found in a XIIIth century Anglo-Norman law (4). In order to understand the implications of the meaning of the term Wargus, we could simply relate it to that other outcast in Christian society, the excommunicate (a figure who has survived until the present day), who was driven out far from his fellow men and treated as a wild animal, because he was not a "believer".

After this necessary preliminary, we can now consider how the Heroic Fantasy works of Robert E. Howard, which we have just discussed character by character, pay homage to the present-day berserkr, to the "fallen" warrior, he who has lost his social recognition and has consequently positioned himself "outwith" society, adhering only to his own rules and moral code.

Thus, the charactersâ common denominator becomes their birth in the wilderness:

Kull, raised by wolves and tigers; Conan, born of a blacksmith and so son of sword and fire, and born on a battlefield so son of war, and who would never renounce his "non-civilized" condition; Bran Mak Morn, who belongs to the Wolf clan, whose men like to disguise themselves with its furs; Turlogh OâBrien, who wore wolf furs and led a wandering existence during the first years of his life; Cormac Mac Art, whose nickname is "the Wolf"; Esau Cairn, who arrives naked as a newborn baby at the planet Almuric, where he becomes a magnificent beast, one more amongst other wild animals; Agnes de Chastillon, raised in the woods, who demonstrates her untamed personality when a husband is imposed upon her.

Also, we can exemplify an outlaw condition, which results in societyâs persecution of the individual and his need to roam the land, and more, we can recognize the characterâs acceptance of his role of that societyâs savior by dint of his very dislocation from it:

Kull, forced to escape after preventing the suffering of a young girl, and who ascends to the Valusian throne which he must guard against his enemies; Conan, outlawed in Cimmeria due to a feud, and who retains his condition of outcast wherever he goes, practicing the profession of thief but becoming king of Aquilonia by his own willpower, and by divine will to boot. Epemitreus, a magician and the symbol of humankindâs destiny, confirms the warrior in his kingship. Conan harbors within himself an alchemic-magic symbolism, for when he "knows" Belit ö an expression to which we want to confer all its depth of meaning ö he merges into her. He will never be forsaken by the pirate woman. He has become the Androgyne, although he does not know it. As a consequence, he who until then was simply an adventurer, now becomes Amra, "the Lion", the king of that jungle that, in Howardâs point of view, is life itself. The throne, then, is at hand.

Bran Mak Morn is the king of a dying race. He is outwith the law of logic that rules the society of men.

Turlogh OâBrien is expelled from his clan and becomes a pirate. James Allison becomes an outlaw, in his life as Hunwulf, when he kills a man and runs away with his lover, while as Niord he proves to be a worthy warrior by performing deeds which no one else could have performed: slaying the snake Satha and defending the land of his race in aeternum, as the mound where he is buried demonstrates.

Cormac Mac Art, Wulfhere the Dane and Athelstane the Saxon are pirates, outlaws, which does not prevent them from being hired in order to save, rescue or help those who need it, taking on impossible tasks in which others could not succeed.

Solomon Kane roams around the world ö he is known as a landless man. He is partly outside society since he follows the rules of a Puritan, attacking that which he thinks is unfair.

Agnes de Chastillon situates herself outwith the law when she kills her future husband. Her courage and dexterity transform her into an estimable fighter, in spite of being a woman in a manâs world.

Stephen Costigan, drug addict, is the only one who can defeat the cadaverous and evil Kathulos.

Esau Cairn will be called "Ironhand" because of his strength, becoming another of Kothâs society and putting and end to the Yagasâs power.

Aryara, who when he falls asleep while guarding duty causes the death of his companions, thus situates himself outwith his own laws. He can only return to legality if he acts as a berserkr.

There is a third characteristic of the berserkr: the one related to his physical strength and his courage in battle. I do not think it is necessary to highlight this, since it has already been made evident in the texts that illustrate each one of the characters that are analyzed here.

We have ascertained how the Howardian heroes form images or incarnations of the same archetype, and they make us interested in their adventures even though their formulae, those of Heroic Fantasy, might be repetitive. The Howardian heroes are driven by the vital force that dwelled within the writer, and they are indeed an everlasting part of his self. Through his characters Howard conveys to us the idea that by means of courage öas Solomon Kane said- all obstacles and all injustices can be overcome, and that in spite of his ideas about races, the hero, his human ideal, can be found in every country throughout the world.

An easy answer to the question why Robert E. Howard presented his heroes as outsiders would be to say that it was because he considered himself an outcast. However, I prefer to think that, as a great expert in myth and in past ages, he wanted to pay homage to that brave and fearsome warrior, the berserkr, who, like the author himself, was no longer of our age.

The Spanish publisher Valdemar has recently published a selection of 19 horror stories by Robert E. Howard in a beautiful hardback edition. The Spanish title translates as Worms of the Earth and Other Supernatural Horror Stories. This new book is the 38th volume in their collection "Gotica", wherein they have already published translations of works by other authors such as William Beckford, Thomas de Quincey, Charles Dickens, Percy B. Shelley, Henry James or E.T.A. Hoffman. We must celebrate the decision to publish Howard alongside such important authors. The cover features a reproduction of a painting by Henry Fuseli, Thor in the Boat of Hymir (1790). The design of the edition also adds a certain dignity to the selected stories. 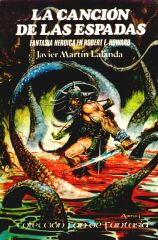