All Shadows:
The Fantastic Visions of Howard and Tolkien

There is not much doubt that the mythic visions of John Ronald Reuel Tolkien and Robert Ervin Howard have stood enough "tests of time" to be considered the two most influential upon twentieth century fantasy.

Both created examples of what followers and critics of fantasy fiction call "mythopoeic" or "myth making" fantasy, although few would argue that Tolkien's is not the more complete example of what JRRT called "Sub-Creation." As critics have noted, Middle Earth (although with multitudinous historical and literary antecedents) is likely the most broadly and deeply realized fantasy world ever imagined — complete and replete with languages, history, mythology, various "peoples," maps, songs, and enough "back stories" and what we might call "tertiary creations" to eventually spin out a dozen or so extra books based upon Tolkien's notes, jottings, and fragments.

Howard's achievement in creating the genre of Sword & Sorcery draws enough more on the historical or "semi-historical" (Atlantis, Pictish Britain, place names only slightly altered from those from the dim annals of history and legend) that his visions border on what I call the "mythomorphic" or "myth re-shaping," However, we must finally admit that his spontaneity of creation and his alteration — at least reinterpretation — of the fragmentary and dimly "historical" must be in that same category or mode that Tolkien called "Sub-Creation." 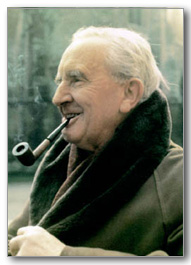 As Tolkien notes in his very important essay on fantasy, "On Fairy-stories":

What really happens is that the story-maker proves a successful 'sub-creator.' He makes a Secondary World which your mind can enter. Inside it, what he relates is 'true:' it accords with the laws of that world. You therefore believe it, while you are, as it were, inside.

I think all REH enthusiasts and most readers in general would acknowledge that Howard achieves this splendidly. The completeness of his world depiction or background may lag behind Tolkien's unparalleled achievement, but his worlds of fantasy are complete enough to insure the enthrallment. They have what Tolkien called in the same essay "an inner consistency of reality."

But Howard would, I believe, have argued with the term "Sub-Creation" and it's parallel term "Sub-Creator." Tolkien, of course, goes to great pains in his important essay to insist that Man is but:

. . . Sub-Creator, the refracted Light
through whom is splintered from a single White
to many hues and endlessly combined
in living shapes that move from mind to mind.
. . . . we make still by the law in which we're made.'

Tolkien's belief, explicit in his essay, is that we can only use what might be called a "recombinative imagination." We were given the stuff of the Primary World and the Primary Creation —and of course those things were bestowed upon us by the Primary Creator. But it is malleable stuff and humans have the power to use bits and parts and refracted colors of the white, whole, pure light from that creation. Further, Tolkien implies that, since we are "made in God's image" that we have also within us as humans the spark of creative genius — but a spark which can never flame fully or truly enough to alter (much less become) Primary Creation. Tolkien sees the artist as imitator of the great Creator, the works of art so "sub-created" to be prayers or offerings of a sort — imitation being the sincerest form of praise (and perhaps of thanks).

Howard's vision would not have allowed for or accepted this Tolkienian/Theistic perspective. Howard's perspective was, ultimately, far more materialistic and cynical and influenced by the emerging "anti-theologies" of both scientific and social Darwinism and of emerging philosophical nihilism. He was more of a mind to remember Dark Valley as a "vale of tears" and Cross Plains and native Texas in general (at least as his imagination transmuted that place) more as the plain of Megiddo or the staging ground for Ragnarok.

While Tolkien (always the devout Catholic, one of the converters of C. S. Lewis, believer in Faith and Good Works as a path to the promise of Heaven) would depict a world where little people make the ultimate difference, where fellowship and selflessness and the virtues of Faith, Hope, and Love ultimately defeat "The Shadow;" Howard would depict a world where that Shadow must ultimately win and the virtues are immense physical Strength, often near-reckless Courage, and Resignation to Destiny and whatever "wyrd" the gods may have imposed upon ones life. It is pretty much parallel to the differences between emerging Christianity in Europe and the bleaker, cloud-covered, colder visions of the Norse especially, and to some degree, the Celts.

There is also a great difference between Howard and Tolkien in what I will call the degree of "hero-centrism." Howard's works depend pretty much entirely upon the strong central character. There is no doubt about the "focal" character in a Robert E. Howard story. While Bilbo and Frodo are central, one could argue, in Tolkien's Middle Earth classics, there are important secondary characters in both The Hobbit and The Lord of the Rings— nay, in many cases with the interlaced plot of LotR, we could argue that the focal character or characters shift through almost the whole cast of a "focal fellowship." In some ways, Howard's "hero-centric" creations might stem from his relative isolation compared to the gregarious and highly stimulating academic and intellectual world of Tolkien. One might argue that Howard had his "Inklings" through "typewriter pal" correspondence with Lovecraft, Smith, and others. One might also argue that Howard saw himself as the central and heavily burdened "hero" of his own life-circumstance-imposed adventure.

Returning to Shadows as a controlling theme for this brief excursion in pondering, Tolkien's vision can be summed up in the fragment of Sam's song:

Above all shadows rides the Sun
And Stars for ever dwell:
I will not say the Day is done,
Nor bid the Stars farewell.

The hopefulness and positive vision expressed by Tolkien's symbolic character for the common man — JRRT's vision of the true hero being the "little" man who realizes through courage, hope and perseverance his own potential greatness and who can, especially in numbers and in fellowship, change the world — is Tolkien's own world view. 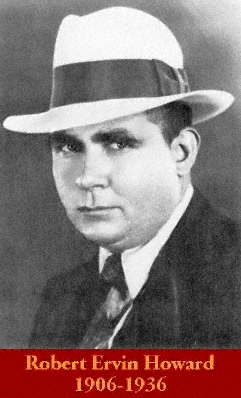 Robert Ervin Howard lived "beneath" the shadows and the clouds and storms of life. Seeing above those shadows was not ultimately possible for him — although there is abundant evidence in the poems and letters especially and in some of the fiction that he fully enjoyed the infrequent brief breaks in the clouds and the rays that poured forth enough to feed his exuberance and self-confidence and creative enthusiasm and voracious appetite for story and storytelling.

We might sum Howard up with a contrastive poetic passage thus:

Beneath all shadows moves the Man
And must forever dwell.
And—soon or late—his day is done:
And Sun and Stars — "Farewell."